A message from Gabriel Christian, the Chairman of Rebuild Dominica

We received a donation today at Rebuild Dominica and a note from Canon of the Anglican Church at Oxford, Reverend Allen Walker. Canon Walker was one of the crew of HMS Fife who braved the still raging waves of the Caribbean Sea to rush to our rescue in early morning of August 30, 1979. We thanked him for still maintaining that sense of duty love, and kinship toward our people. In 2014 Canon Walker had written me this note after he discovered an essay on Hurricane David which I had authored and which Dr. Fontaine published on TheDominican.net.

Feel free to extend a warm salute to a great humanitarian who remains steadfast in his concern for Dominica and humanity. Maintenance of such bonds are key at all times – and more precious at the worst of times. Let us take due note.  Canon Walker’s email is noted:

I have tried to make contact with you before but without luck.  I just hope that you are the same person who wrote the 2012 article titled – Remembering the Generosity of the Nations – which I found recently on the internet while I was putting together some memorabilia about my 23 year career in the Royal Navy.

At the time I was the Chief Radio Weapons Engineer serving aboard HMS Fife and remember with astonishment the sight that greeted us that morning as we travelled through Woodbridge Bay and drew near to the jetty at Roseau, after having been dispatched there by the British Government in response to the devastation caused by Hurricane David. At the time we were having our Caribbean tour so-to-speak and were spending some six months away from home away on deployment.

The devastation was beyond anything we had ever seen or experienced before. Like all Royal Navy ships we had been well prepared for such an event by going through practice and drills while working a ship up at Portland – our training base in the UK. Despite this no one ever thought our expertise would be put to the test like this. But they were and I think we can honestly say that we all rose to the occasion. I remember well all the shore parties returning to the ship late at night thoroughly worn out and then we would all be up early the next morning with another set of tasks to carry out – engineers restoring water supplies – working parties clearing roads – others even helping deliver new born babies.

My department were the ones who were sent by our Captain (Captain Sam Fry) to help get the hospital up and running again, and to do other work that was urgently needed. Like you I recall our helicopter (nicknamed budgie) doing stirling work across the Island and flying 24 hrs a day – well beyond its official hours. As a large ship we carried our own doctors and medical staff and therefore our on-board hospital (sick bay) worked flat out to treat the injured and those needing urgent medical care.  Sam Fry later wrote a book titled Fruitful Rewarding Years in which he devotes a whole chapter to his command of HMS Fife, including the time spent at Dominica.  It has a lovely photo of me and my gang of lads attempting to cover the hospital roof to keep out the rain – although, as you said in your article, the sun was now shinning and the weather was quite hot again once the storm had abated.

Towards the ends of the first week I recall that we were dispatched to Jamaica to pick up relief supplies. We left our helicopter with you on the Island so we could pack the hanger with stores and other urgently needed supplies. On our return there was, as expected, a great deal of other outside help that had recently arrived. I think we stayed another few days before finally setting sail for the UK again.

HMS Fife was awarded the Wilkinson Sword of Peace for its efforts in August 1979. We were all so very proud as this was the highest peacetime honour given at that time.

Gabriel it would be good to hear from you – and perhaps when we come over to America next to visit our Son we might get to meet you – in the meantime I wish you all of God’s blessing in all that you do.

With all good wishes

Rebuild Dominica has partnered with Caribbean Cargo DC. We invite you to join our relief efforts during this donation drive event. Please drop off donated items and contributions toward shipping this Saturday (September 19th, 2015) from 10 AM to 4 PM at Caribbean Cargo DC – 9700 Martin Luther King Jr Hwy, Lanham, MD 20706.

For supporters unable to drop off during this relief drive, please consider making an online contribution. Many thanks in advance for your support! 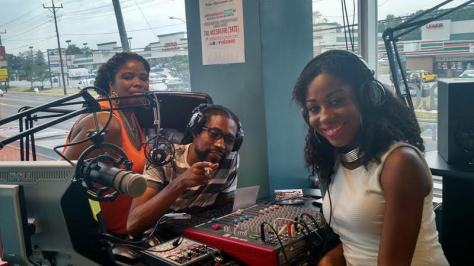 Behind-the-scene photos of Rebuild Dominica spokesperson, Chardelle Moore, who was on-air live as a special guest on the MADD Saturdays Show at Ablazin ‪Radio on September 12th, 2015!

Our Media Team welcomes opportunities to share information on the disaster relief efforts in Dominica. Please contact us to discuss ways that you can help Rebuild Dominica. Many thanks to our supporters for helping to build awareness in Dominica’s time of need!

Founded in 2015 in the wake of the devastation wrought by Tropical Storm Erika, we are now organising relief from the direct hit by category five Hurricane Maria: the worst natural disaster in our nation's history.